“Success in the fight against hunger endangered,” the editors of the Global Hunger Index 2017 comment on the food situation in the 119 countries comparison (1). By writing “wars and the consequences of climate change, have partially reversed the progress of recent years in the fight against hunger” the German newspaper Frankfurter Allgemeine Zeitung is becoming even clearer.

According to the Global Hunger Index (GHI), global hunger fell by 27 % in 2017 compared to the turn of the millennium. But these advances are distributed very differently across the continents and also regionally within countries most affected by hunger. While the situation has improved in China and Brazil, Eastern Europe, North Africa and South America, it almost stayed unchanged in most regions in South Asia and Sub-Saharan Africa and people continue to suffer from hunger. The situation is alarming or serious in eight countries, such as the Central African Republic, Chad, Sierra Leone, Zambia, Madagascar, Yemen, Sudan and Liberia. At the same time, countries such as South Sudan, Nigeria, Somalia and Yemen even face acute famine.

The absolute number of starving people in the world has risen to an estimated 815 million people in the past year (2016), with no data available for nine crisis-hit countries (1). Still, every ninth person in the world is affected by hunger: people living in war zones and areas with significant damage because of climate change in particular. The following figure illustrates the severity of hunger in the world (2). 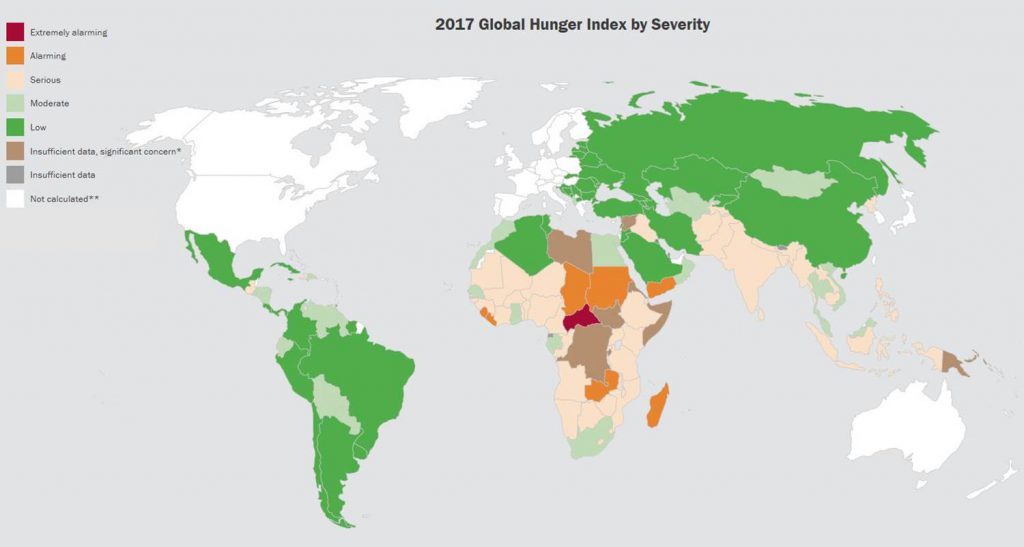 The Global Hunger Index (WHI) uses four indicators to measure the nutritional status of the population in a country each year consisting from the following aspects:

For the first time, the report of 2017 also identifies differences in malnutrition and child mortality within a country. Fluctuations of more than 50 % depending on the region are not uncommon.

Considering the available data, experts doubt that hunger will be eliminated by 2030 as agreed by the United Nations unless new options are taken into account to fight against hunger.