The third Students4Kids competition started with more than 80 ideas submitted from Germany and Uganda. At the Summit of the initiative on 11 October 2018, the three most convincing teams presented themselves to the jury and an interested audience. In the end, the winner was picked and young scientific talents and experts had taken the fight against hidden hunger one step further. 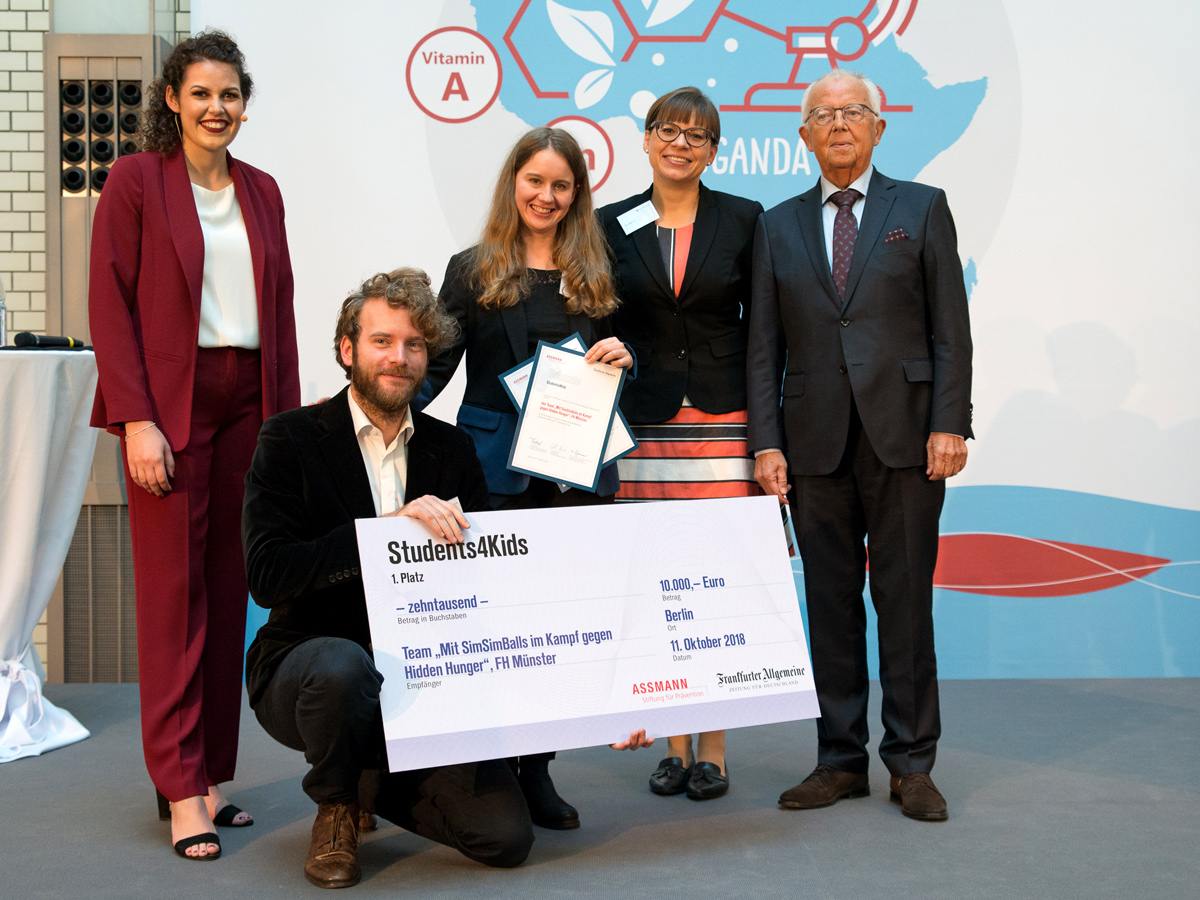 After a short welcome by Prof. Dr. Gerd Assmann, Chairman of the Board of the Assmann Foundation for Prevention, and Gun Hellmich, Deputy Head of Classic Sales at F.A.Z., two proven experts gave the participants impulses for the further event. Günter Nooke, Africa Representative of the Federal Ministry for Economic Cooperation and Development (BMZ), emphasized the importance of preventive work of initiatives such as Students4Kids. “The damage caused by malnutrition in the first few months and in the first five years cannot be compensated for with money,” said Nooke. The BMZ therefore expressly supports the sustainable approach of Students4Kids. Hans Konrad Biesalski, head of the Institute of Biological Chemistry and Nutrition Science at the University of Hohenheim, summed up the dilemma of hidden hunger as follows: “We are hungry for energy, not for vitamin C.”. A sufficient supply of all necessary nutrients therefore often requires targeted intervention, such as through the creative ideas of the young competitors.

Updated and provided with new impulses, the audience then turned their attention to the finalists of the Students4Kids competition. Three university teams from Germany and Uganda had qualified for the final: Amelie Detterbeck from Bayreuth University and Jennifer Atoke from Muni University in Uganda with their project “Help People Help Themselves”, Jolien Maltzahn and Wieland Buschmann from Münster University of Applied Sciences and “With SimSimBalls in the fight against Hidden Hunger” and Emmanuel Emaru, Racheal Kirabo, Faith Oguttu from Makerere University in Uganda with “Proper Nutrition – A Bright Future”. The Ugandan team presented via live broadcast from Uganda. After their presentation, all teams answered the critical questions of the audience.

The decision was not easy for the jury members, but in the end a winner was found: Jolien Maltzahn and Wieland Buschmann with their project “Mit SimSimBalls im Kampf gegen Hidden Hunger” were the lucky team. The project convinced the jury with its pragmatic approach and intensive preliminary work. The students developed a recipe for sesame-millet balls based on previous field studies in Gulu, in Northwestern Uganda. This easily supplements the one-sided diet of the children in a pilot institution with valuable vitamins and minerals.

The team will receive € 10,000 in prize money from the Assmann Foundation for Prevention as kick-off funding for the implementation of their project in Uganda.

The three finalists also answered our questions in front of a camera at the Summit.

The team behind the project "Proper Nutrition - A Bright Future":

“Especially in rural Uganda, the nutrition is mainly based on staple crops, which often lack essential micronutrients such as zinc or iron. Zinc deficiencies can lead to stunting and growth retardation, which were both effecting approximately one third of children under five years in 2016 in Uganda. About 43% of the rural population is found to be in severe poverty. Hence, we want to find solutions for solving micronutrient deficiencies that are fast and cheap.”

The team behind the project "Proper Nutrition - A Bright Future"

“We want to tackle the problem of poor balancing of diet by caretakers and low frequency of meals for children. This is because food intake directly affects the nutritional status of children, leading to deprivation of essential nutrients to the body for its sustenance. A study done in Ongino sub-county revealed close association of malnutrition with education level of caretakers. Therefore, we want to influence rational decision making for meals by caretakers of these children.”

The team behind the project „With SimSim Balls against Hidden Hunger“

“Our on-site nutrition survey conducted in the autumn of 2017 showed that children consume too little iron, zinc, niacin, calcium, vitamin B12 and vitamin C through their diet. If these nutrients are not supplied in sufficient quantities, various deficiency symptoms can occur. This is why we are developing a millet ball that contains precisely these nutrients to prevent hidden hunger.”