The World Hunger Index (WHI) as an internationally established measure of hunger in the world, draws a sobering picture in 2018: Around 124 million people worldwide are currently suffering from acute hunger. That are 44 million more than two years ago. Especially children are the victims: About 151 million children under five remained in physical and mental growth, 51 million are considered wasted.

From a regional perspective, the situation has remained problematic for the most part in South Asia and sub-Saharan Africa, notably Chad, Haiti, Madagascar, Sierra Leone, Yemen, Zambia and, above all, the Central African Republic. Countries such as Angola, Rwanda, Ethiopia and Myanmar, on the other hand, show visible progress against hunger even in the two crisis regions.

As the number of starving people in the countries generally doubles as soon as they are directly or indirectly affected by armed conflict, hunger is primarily a political challenge. The joint report by Concern Worldwide and Welthungerhilfe (engl.: World Hunger Relief) states that instead of constantly understanding hunger primarily as a result of environmental and natural causes, it must, like flight and displacement, usually be understood and fought as a result of political processes. 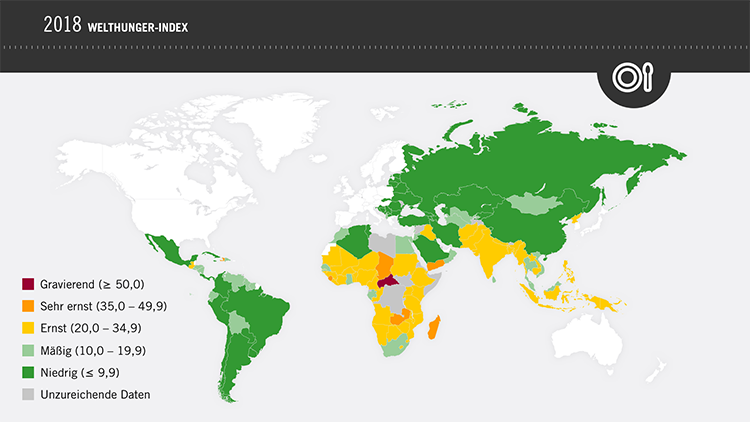